Here's a story written by one of our customers Polly Appleyard. She loved our star map so much she cast her own pregnant belly to create an art installation. Read on for the beautiful tale of the Cosmic Creation.

During my pregnancy there were many magical moments, but two really stand out. The first was a dream I had very early on, when I had only just found out I was pregnant. I dreamt I was carrying a girl and her name was Pixie - both of these things came true! The second magical moment was creating the art installation Cosmic Creation, which all began when I was about 8 months pregnant.

I studied Fine Art at university and one of my favourite mediums was plaster of Paris. I had made various art installations with casts of various body parts. So when my belly started getting rounder with my baby inside, I started plotting to make a cast of my pregnant belly! I just didn’t know how I was going to do it alone, as I’d only made casts of other people’s bodies, so I started doing some research.

The perfect opportunity arose to make the cast at an arts event in the Catalan forest. I knew that quite a few of my very close friends would be going so I sent out some private messages asking those select friends if they’d be interested in helping me to make the cast. I received an incredibly enthusiastic response!

On the Friday morning, we chose a corner of the dining room to set things up and to make myself comfortable. It had a lot of natural daylight because it was a glass conservatory. It was also much warmer in there – early May in the forest can still get rather chilly! We did not have much privacy, most participants were busy doing workshops, but I was also feeling so perfectly gorgeous in my blossoming pregnancy – I’d gained 14 glorious kilos - there was no room for getting shy or self-conscious! 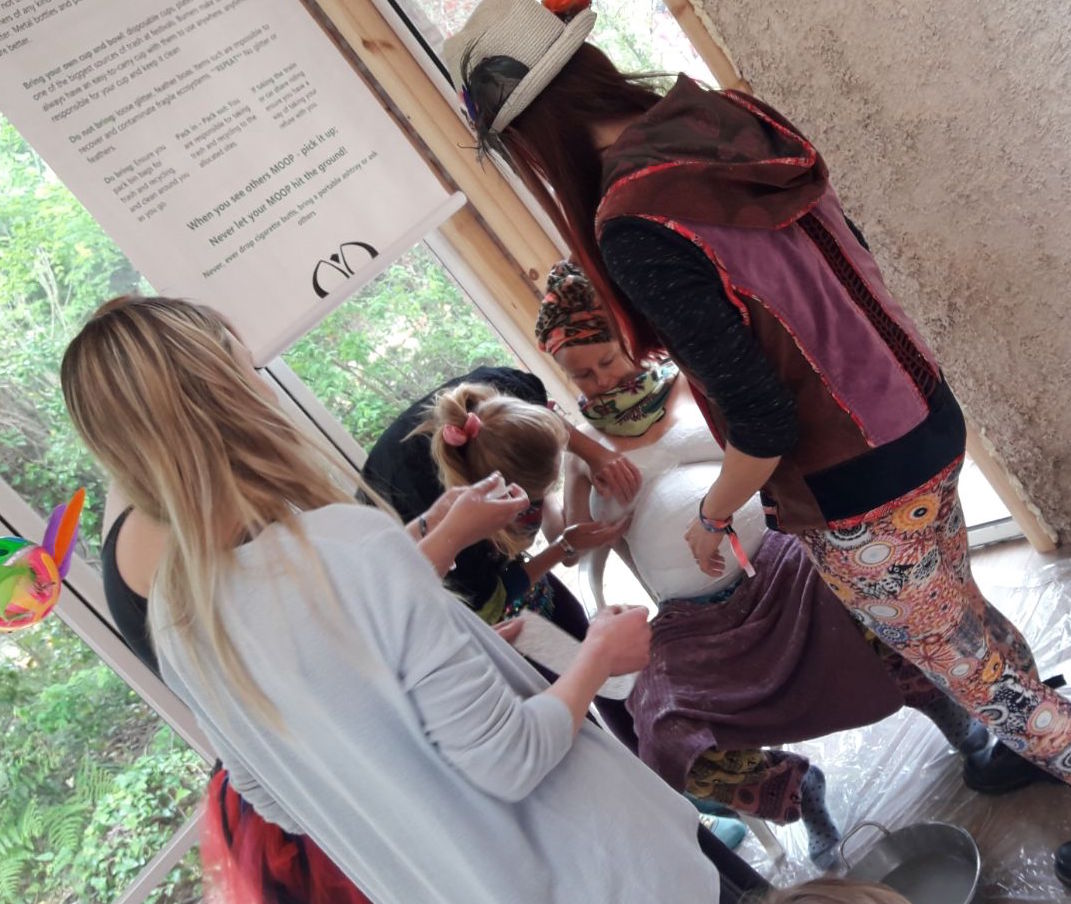 I had pre-cut medical bandage strips, so that my friends just had to dip them into water to then place over my 8 month pregnant form. I stripped off everything from my top half and we smothered my bare skin in coconut oil. My friends took great pleasure in smoothing the plaster strips over my pregnant belly! Pixie gave a good few kicks to show her approval. As I sat there, the plaster hardening and waiting for it to dry, I started to wonder what I was actually going to do with the cast. The idea had always been to create some kind of wall hanging, an art piece or installation, to be able to look at and remind us of that beautiful moment in my pregnancy, and the fast approaching, amazing, natural birth of our daughter. 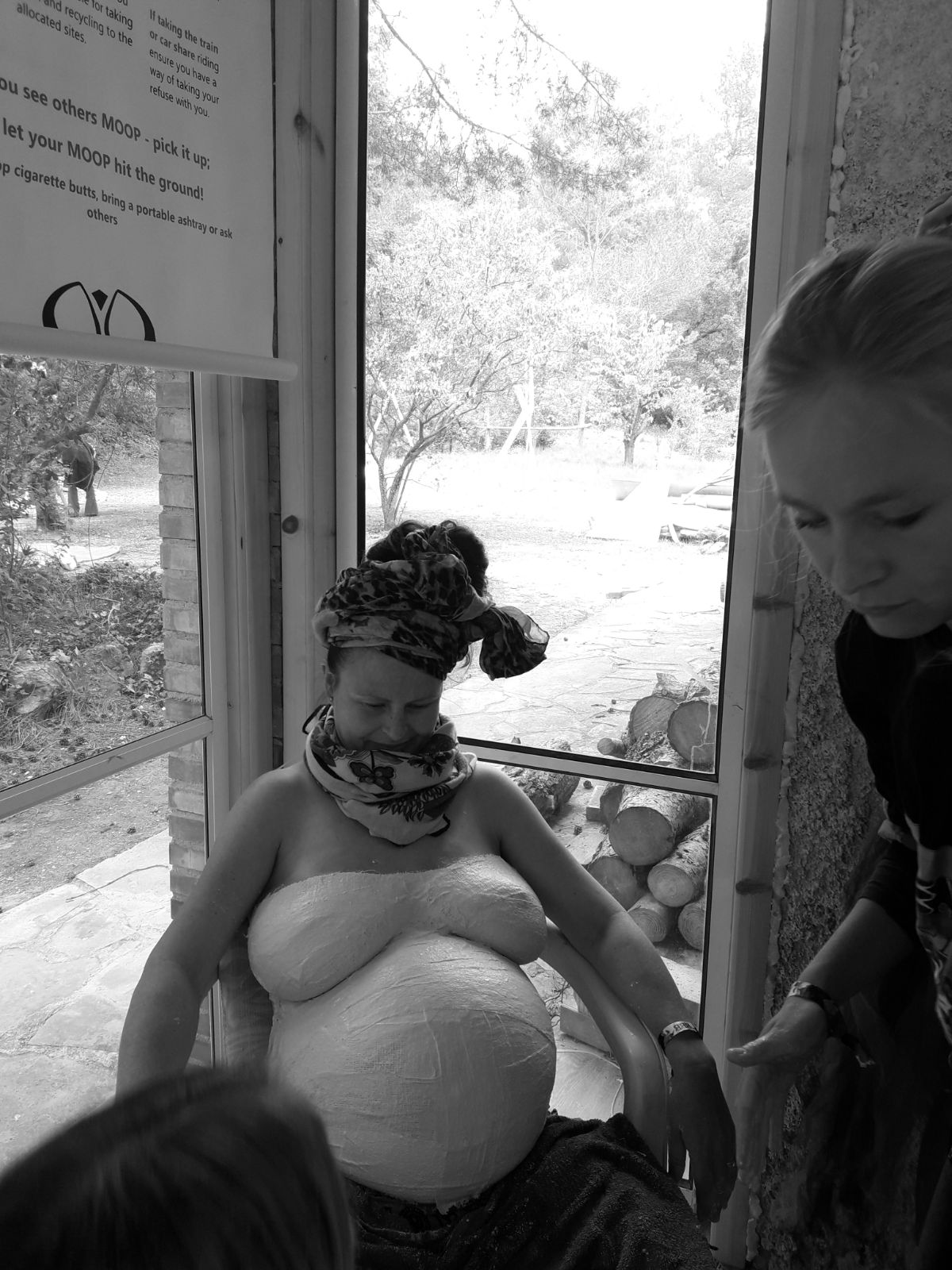 Since Art school, I had made various light installations for different events, so the idea of turning it into a lamp or using some kind of light source also came to mind. But I still didn’t have a clear idea of what to do with it. So I took it home, wrapped it up and stored it in a safe place.

Inspiration came 5 months later, when my wonderful friend Fi gifted me a Star Map from Under Lucky Stars, with the constellations which were above my then 4-month old daughter, Indigo Pixie, when she was born. This blew my mind, I absolutely loved it – and it went straight up on the wall in her bedroom.

A few months later, the same arts event was coming up again, and they had chosen a theme, “Cosmic Love”. I knew I wanted to participate by making an art installation with the cast I had made of my pregnant belly at the same event the year before. All of a sudden, a vision came to me, what if I incorporate the star constellations from the star map that Fi gave me? So I started thinking about how I could make this a reality.

I remembered a particular piece I had made when I was at university, which consisted of draping a plaster soaked blanket over a human form, lying down. I placed the final piece on the floor in the middle of an art gallery, and it gave the impression that someone had just decided to lie down and sleep there! 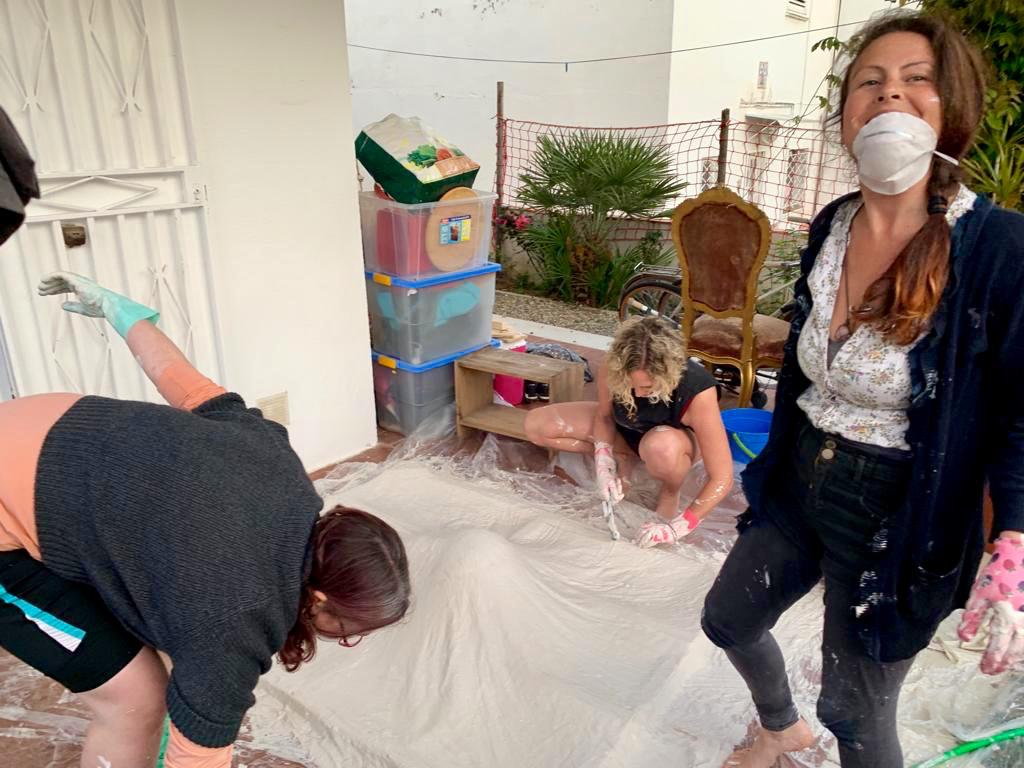 As my ideas developed, I decided to make a “blanket of stars” out of the pregnant belly cast. I realised that this part was not a project I could undertake alone either, so I posted on the event wall asking for help. Once again, it was met with a fantastic response, and a few weeks later, Laza, Priscillia, Fergie, Bo, and Aiofe, came over, excited and ready to help me realise my vision. 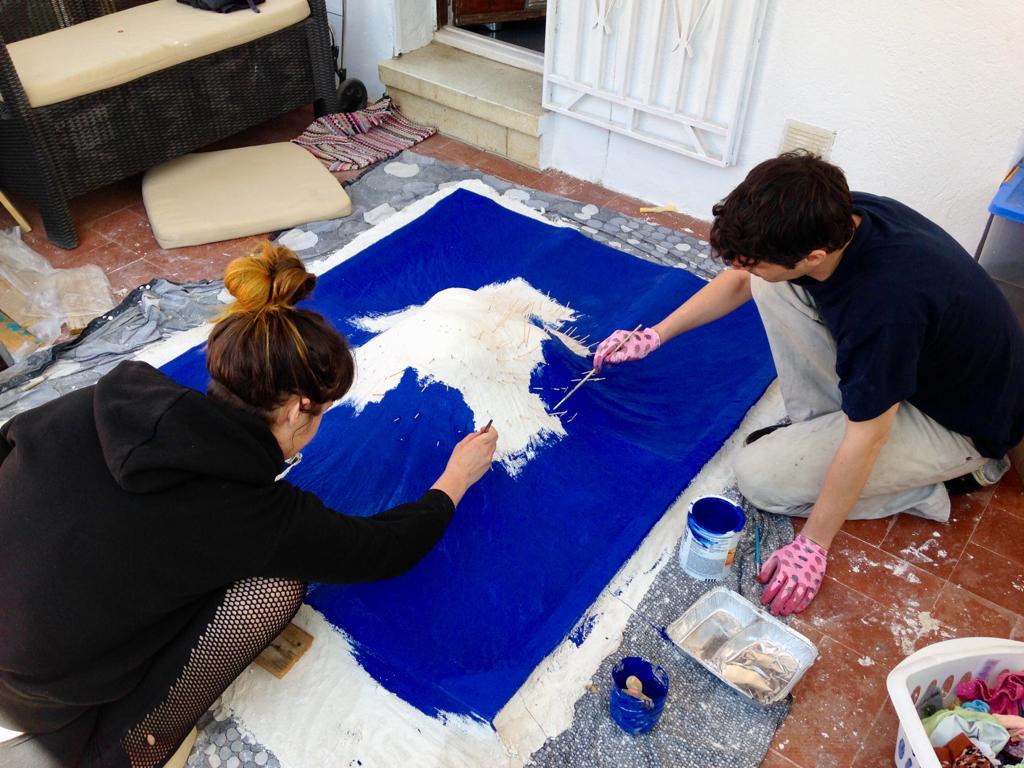 The final piece was made over the course of a few days. Fergie, Bo and Aiofe each had to hold onto a corner of the hessian fabric as we dipped it into the ready mixed bucket of plaster. Plaster can dry quite fast so we had to move on our toes! We worked on my back porch, and luckily the weather was kind, so we were able to take off any clothing that we didn’t want to get covered in plaster. We were also prepared with masks and gloves. We draped the extremely heavy plaster soaked blanket over the original plaster cast and Fergie and I went round with a hammer and nails, attaching it to a wooden frame.

Pixie’s daddy, Ugo, had made the sturdy frame to attach the piece to earlier on that week. Immediately the plaster started to harden, but it would take another two days before it was hard and dry enough to start working and painting on.

Once it was dry, I mapped out the constellations, carefully copying the Under Lucky Stars Star map. This was not easy to transfer a 2D image onto a 3 dimensional form, I drew them on freehand so I focused on the bigger, more obvious constellations, trying to determine the distance between each pair of stars. 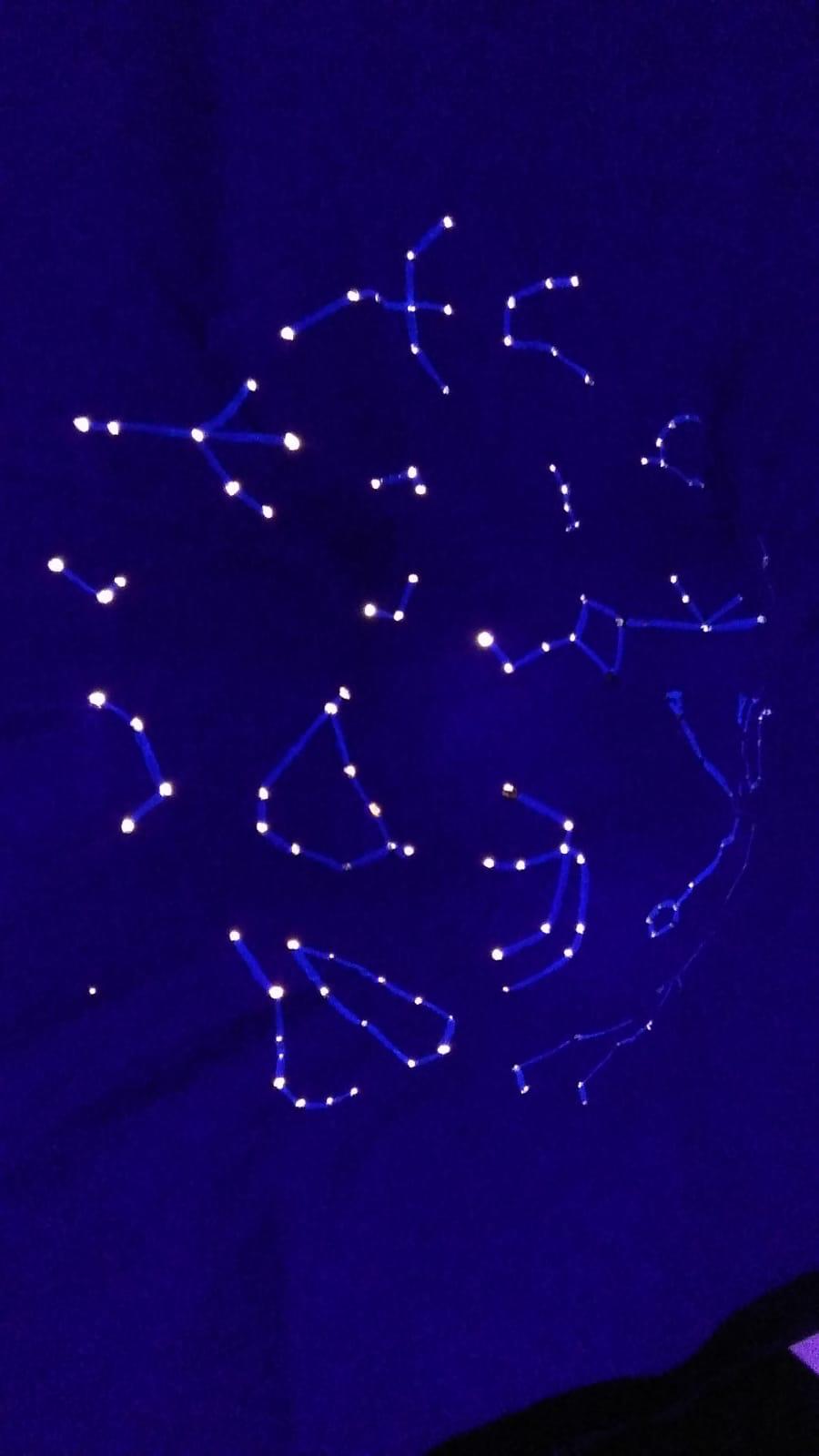 We then drilled holes through the plaster cast for each star before painting the whole surface in indigo paint – this was chosen to reflect the darkness of the night sky, but also as my daughter’s first name is Indigo! We had to poke toothpicks though each drilled star hole so the paint wouldn’t cover them up. After the indigo paint had dried, I connected the constellations with lines of UV reactive paint.

It was finished and I was so pleased with how it had turned out. Now it was ready to take to be exhibited at the arts event in the forest near Reus. 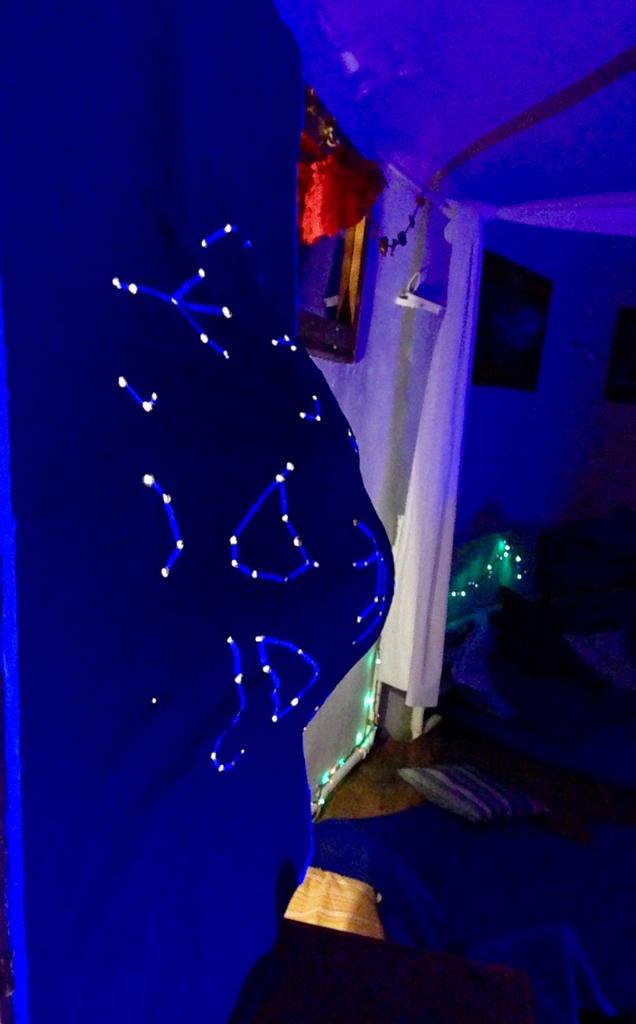 We transported the final piece to the event site a day before the event started. I did some touching up outside in the sunshine before we installed it on a wall in the main dance space, which was a dome shaped building. It took pride of place, right at the back behind the DJ booth. We installed a bulb behind it, which shone through the holes making the stars twinkle brightly. A UV lamp was placed on the floor in front facing upwards, to emphasise the lines joining the constellations.

My vision had been realised! I named it “Cosmic Creation”. It was on display for everyone to enjoy during Cosmic Love, and is now a permanent fixture on the living room wall in our home. My daughter, who normally goes by her second name, Pixie, is 18 months old now, and she absolutely loves it, she can reach up and touch the belly. I explain to her that it was my belly and she was inside. She is delighted whenever we turn the lights on and make her birth stars twinkle. 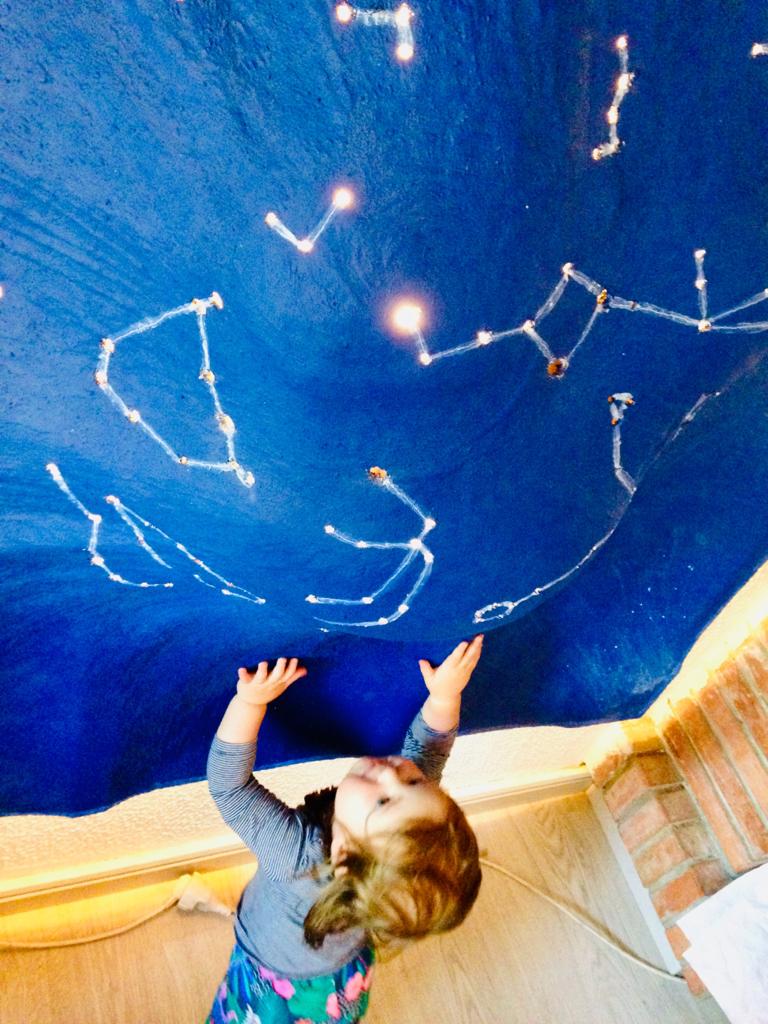 Thank you Under Lucky Stars and Fi for inspiring this special piece of art!

How to Make a Star Map – for Free!

Do you like custom star maps to commemorate a special event in your life? Feeling crafty and have some spare time? Here's a 6 step guide about how to make your own star map at home - for free.…

Where do comets come from?

A comet is an icy, small Solar System body that, when passing close to the Sun, warms and begins to release gases, a process called outgassing.…