In the past two posts we’ve talked greatly about spring and winter constellations, also known as seasonal constellations. In other words, these patterns of stars are only visible for northern hemisphere observers at specific times of the year. In this way, constellations such as Boötes, Leo, Cancer, Virgo and Hydra are especially prominent during springtime. On the other hand, Orion, Canis Major, Gemini, Taurus, Perseus, Eridanus, and Cetus are traditionally considered winter constellations.

We’ve also delved into how the constellations and the patterns in the sky were perceived by ancient cultures. We’re therefore aware of the great importance the night sky held for our ancestors, such as the ancient Greeks, the ancient Mesopotamians or the ancient Egyptians. In these civilizations, not only did the constellations play a huge role in the signification of each culture’s religion and mythology. The constellations also incarnated a critical function for society: they served as a calendar and as an invaluable tool for travelers and sailors before the times of ultra-precise maps.

So, if scores of constellations come and go as the year goes by, are there other constellations that remain fixed in the sky throughout the year? Of course! And thinking back to our ancestors, these permanent constellations were of the utmost importance for navigation purposes, or even for early farmers, who looked to the stars for guidance on when to plant seeds or harvest. These constellations have been so important for mankind that they still hold a relevant place in popular culture today. As such, circumpolar constellations are perfectly distinguishable in present-day star maps, and are not at the mercy of seasonal changes in order to be seen. 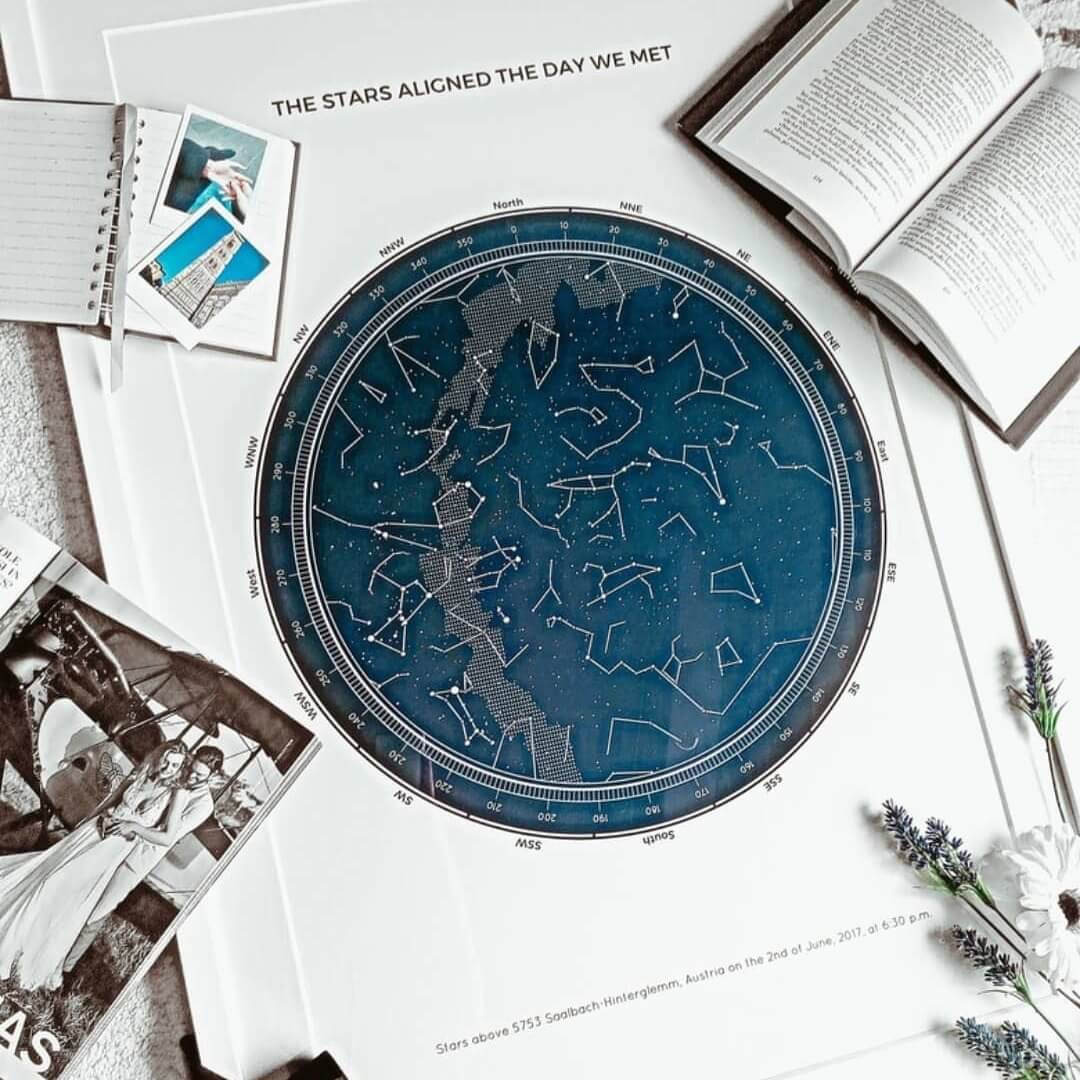 Without further ado, for today’s feature we’re going to discover in depth what circumpolar constellations are!

Another meaning behind the term circumpolar constellations is that it refers to stars that circle the north and south celestial poles without ever dipping below the horizon. Circumpolar stars are coined this way because they appear to rotate the Earth’s poles. In the northern hemisphere, circumpolar stars rotate around Polaris, also known as the Pole Star, considered to be our closest star to the North Pole.

If you’re wondering which circumpolar constellations were visible during significant days in your life, such as your birthday or even your wedding, we suggest you check out the maps printed by Under Lucky Stars. All you have to do is give them a specific time and location and they will conceive a precise star map of how the patterns in the sky looked like on that date!

You might not be aware of it, but circumpolar constellations are some of the most well known groups of stars in the sky. Proof of this is that they include the Ursa Major, which is probably one of the most famous constellations, if not the most, in popular culture.

Who doesn’t know the Big Dipper? This famous asterism shaped like a spoon is one of the most familiar shapes in the sky, and it is found within the Ursa Major constellation, which is visible all year long for northern observers. And if you’re especially fond of the Big Dipper, you can even have it printed among other constellations on your phone case, also thanks to Under Lucky Stars. 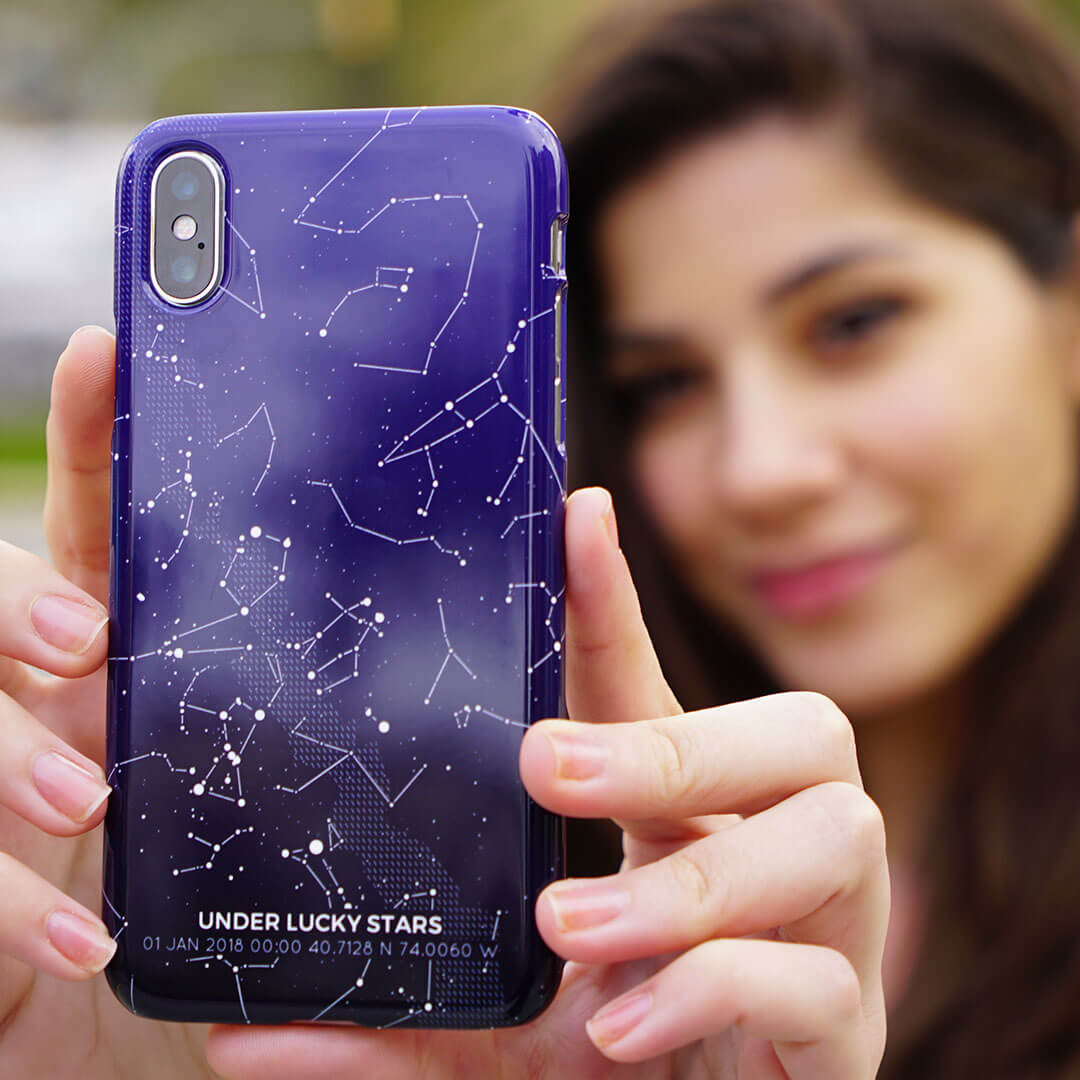 The Ursa Minor, also called the Little Dipper, is another circumpolar constellation which never sets in the northern sky. The greatest particularity of Ursa Minor is the last star found in its tail. This star is known as Polaris, or the North Star, and it never moves from its spot in the northern night sky. Therefore, this circumpolar constellation played a huge role for ancient travelers and sailors, and keeps doing so today for astronomers and aficionados alike.

Cassiopeia is a northern circumpolar constellation with a very discernible shape, that can be viewed all year long. This constellation looks like a “W” or an “M” in the sky, depending on where it is seen. We’ve covered the myth around Cassiopeia in the blog before, so if you’re interested in the tale behind it, go check that out! But long story short, the myth of Cassiopeia revolves around an Ethiopian princess who was chained by the gods to remind others not to be so arrogant.

As we’ve seen with other constellations, the story behind the Cepheus constellation is also linked to its neighboring patterns of stars. In this way, Cepheus was Cassiopeia’s husband. Both are northern circumpolar constellations which never set below the horizon. Cepheus was an important constellation back in the day because it contains cepheids, which were used to measure long distances.

Carina is a constellation in the southern sky, perched near the south celestial pole. Its position makes it a circumpolar constellation for most of the southern hemisphere. Its name actually derives from latin, meaning the keel of a ship. For the ancient Greeks, it represented the ship used by the hero Jason on his quest for the Golden Fleece.

Centaurus is one of the brightest and largest circumpolar constellations in the southern sky. It is also one of the oldest known constellations, as it was included by ancient Greek astronomers in some of the earliest written records on the celestial objects found in the night sky. As it name indicates, Centaurus is reminiscent of the Centaur, a renowned Greek mythological beast.

Crux is a circumpolar constellation seen in the southern sky. It’s actually positioned exactly opposite from Cassiopiea on the celestial sphere. This means that both constellations will never appear in the sky at the same time.

Crux is actually a very easily distinguishable constellation in the southern sky as, despite it being the smallest of the 88 modern constellations, it is one of the brightest. Its most famous asterism, or pattern of stars, is the Southern Cross, which was used for ages by travelers and navigators wandering the southern hemisphere.

One of the latest tattoo trends whose popularity is increasing every day is constellation tattoos. Whether for their elegance, meanings and designs.…

The perfect moment to go camping in the wild and gaze at the stars around a bonfire with loved ones.…