Social worker finds an unusual way to help her community deal with loss.

“Never let the guys forget me”, Paul told his Captain, Rafael Reyes shortly before he died. Like too many firefighters, Paul McGill of the El Paso Fire Department in Texas died of a type of cancer common to his profession, caused by the inhalation of toxic fumes. One thing he really wanted was that his colleagues, his fellow firefighting heroes, would still remember him when he was gone.

Having heard of Paul’s wish to be remembered, Katie Herrian, social worker who provides support and grief counselling to 12 different fire departments in Dallas, Texas, decided to help with the grieving process and commemorate the life and legacy of Paul McGill. She presented Chief Reyes and his current department in Cedar Hill with a star map of the sky over El Paso at the moment of Paul’s death, with Paul’s name as a title.

Upon seeing the positive impact the star map had on Chief Reyes and his team, Katie realised how important it was to have something tangible to remember Paul by, keeping his memory alive. When Daniel Kendall, a firefighter from the Duncanville Department passed away, Katie created a second star map to help his colleagues cherish the memory of someone who was, in many ways, their family member. 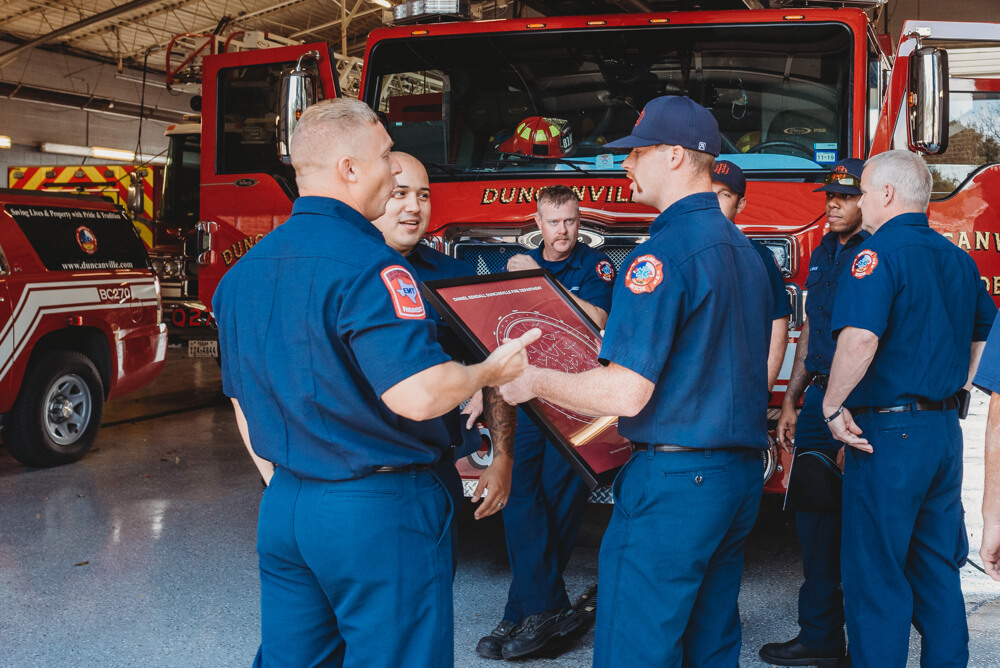 We heal better when we grieve as a community

Katie’s idea to use the star maps as a means of healing is simple yet colossal in its impact: each time another life is tragically lost within the fire department, whether in the line of duty or because of its most virulent killer, cancer, the hero’s death is mourned in a special way. The plan is for Katie to create a new star map with the name of the firefighter, and their moment of passing. Then, the last department to have suffered a loss hands the commemorative star map to their grieving colleagues from a neighbouring department. With this gesture, the connection serves to share the load of the loss, to forge a bond made by fire and tears and also, it encourages those heroes to open up and be vulnerable, thus helping them heal. 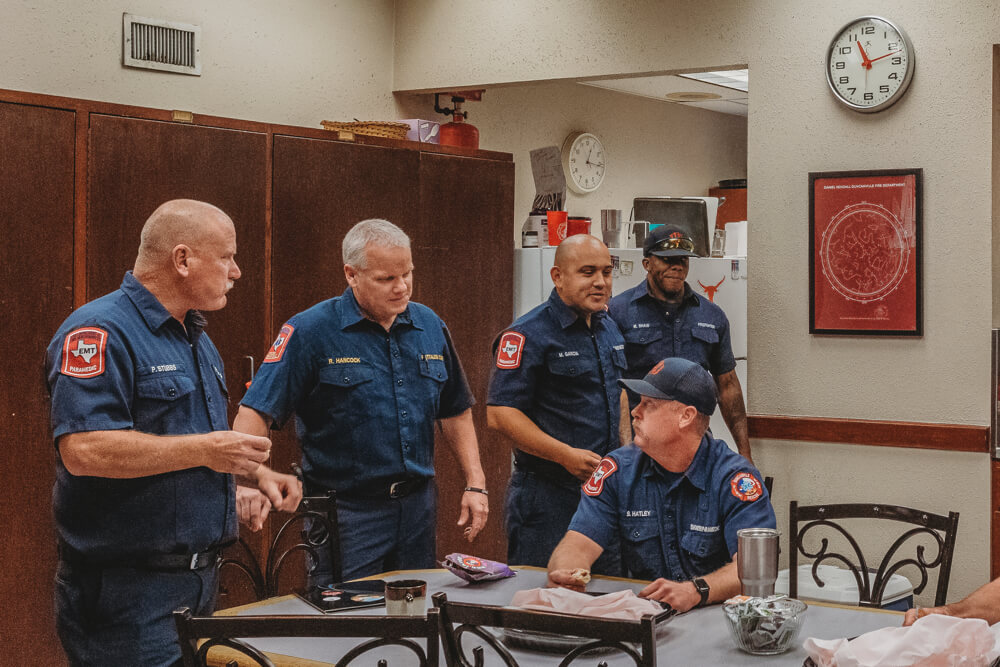 Chief Reyes, Paul McGill’s colleague and friend, said that every time someone steps into the office and notices the star map with Paul’s name, the conversation opens up. Who was he? What is that all about? It breaks a barrier of silence and it gives firefighters their own special way to grieve.

The same happened when the second star map arrived and got handed over by Chief Reyes to Chief Chase of the Duncanville Fire department. Now Daniel’s star map hangs on the wall in the Day Room, the “heartbeat of the Fire Station”, where all the firefighters gather when not on duty. It serves as a reminder of their colleague and it shows them that nobody is forgotten. The map brings about stories of who Dan was, the moments they shared, anecdotes, laughter, and tears.

“We shouldn’t let our sense of bravery overshadow what’s happening to us.”

Especially for a profession of individuals giving their lives to improve and better those of their fellow humans, death comes as a challenge, an unfixable, uncontrollable glitch. This moving initiative serves as an outlet, a way to process emotions that might otherwise be suppressed and shut down. In Katie’s words, it also communicates to the otherwise tough and rough firefighters that their emotions need to be voiced and they need to focus on “not letting our sense of bravery overshadow what’s happening to us.”

Ultimately, as she so adequately phrased it, “the more we talk about hard things the lighter the load gets for all those affected”. 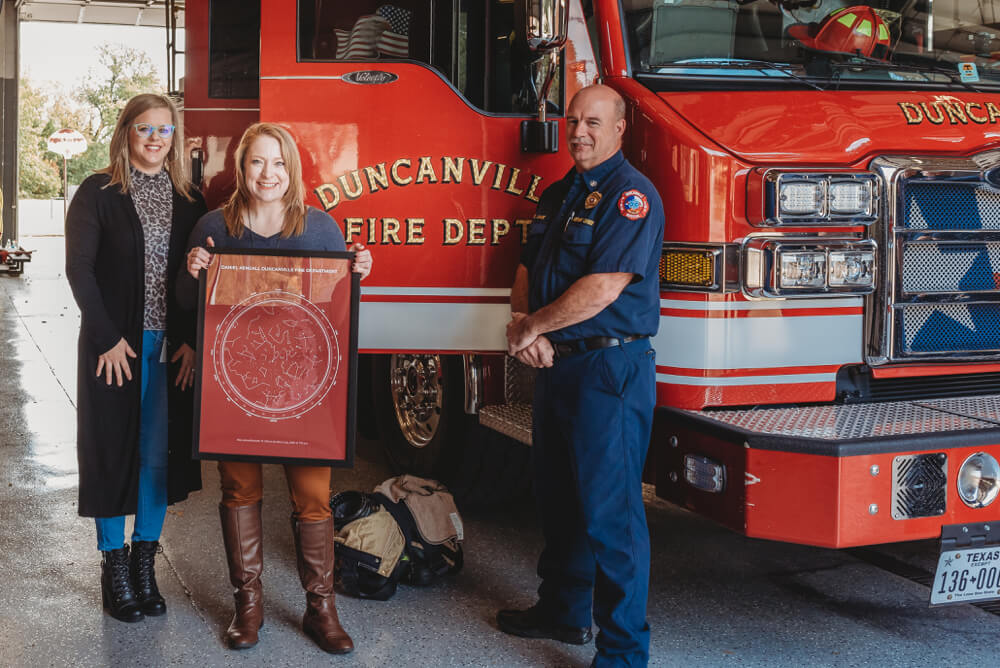 A third star map is currently on its way to Duncanville now, from where Chief Chase will deliver it to the neighbouring Fire Department in Waxahachie, Texas. We hope it will serve to lighten the sadness that Chief Boyd and his team feel as they honor and remember John, one of their fellow firefighters who passed away in the line of duty, as many self-sacrificing others before him have.

The response to the initiative has been so strong that Katie Herrian mentioned its potential to become a state-wide approach, making these star maps an avenue to open up conversations on loss, legacy and remembrance. Having heard of Katie’s project, we’ve vouched to support her in connecting fire departments in their grief, using symbols to allow the legacies of brave women and men shine on, just like the stars above them when they passed away protecting us.

The whole team at Under Lucky Stars feels honored to be a part of this community healing project. 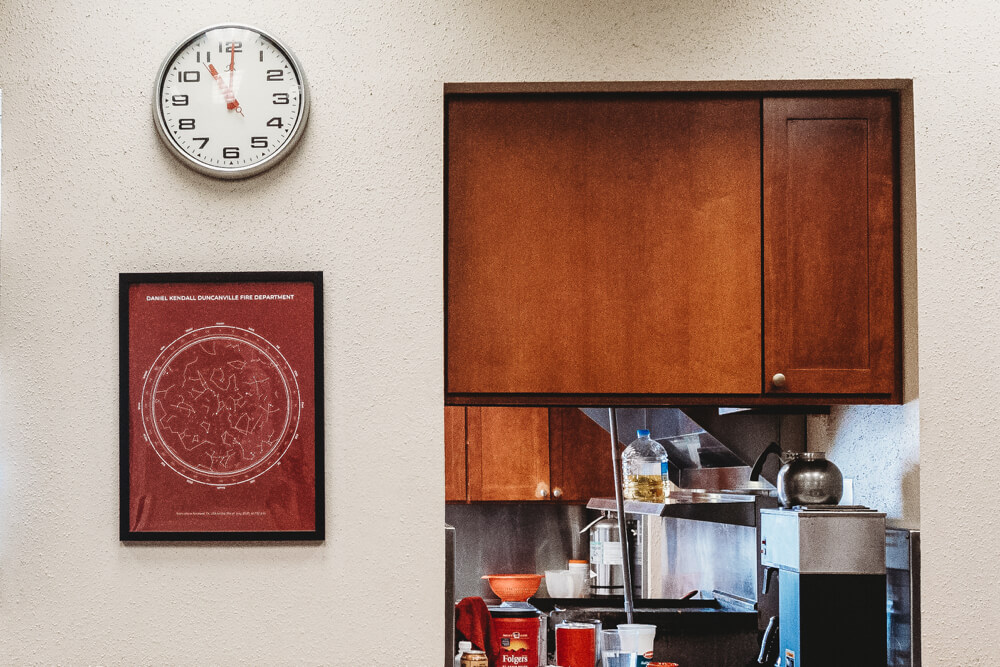 4 and a half reasons to avoid Amazon this Christmas

We thought of 5 reasons not to do your Christmas shopping on Amazon this year, and what to do instead.…

Stargazing could be the next victim to Climate Change

Astronomers are increasingly facing a new phenomenon in their field: "dome-seeing." The future of stargazing as we know it could be at risk - the climate crisis has a new victim in its sights.…