The night sky has been watched, enjoyed, studied and interpreted since the dawn of mankind. In our fast-paced modern world, much of our celestial knowledge has been lost. We may understand them better on an academic level, but most people nowadays couldn’t even point to the North Star. No, it’s not the brightest star in the sky! Our sun is the brightest, followed by Sirius. The North Star is actually the 45th brightest star.

City lights have essentially blotted out the stars and laptops, phones and televisions stop us looking up in the evenings. Weeks can easily go by without seeing a single star and, when we finally see them, we don’t know what we’re looking at. That romantic image of a lover pointing out the different star constellations to their beloved, or a father showing their child Ursa Major, Ursa Minor and Orion’s belt is growing dimmer as our screens are glowing brighter. 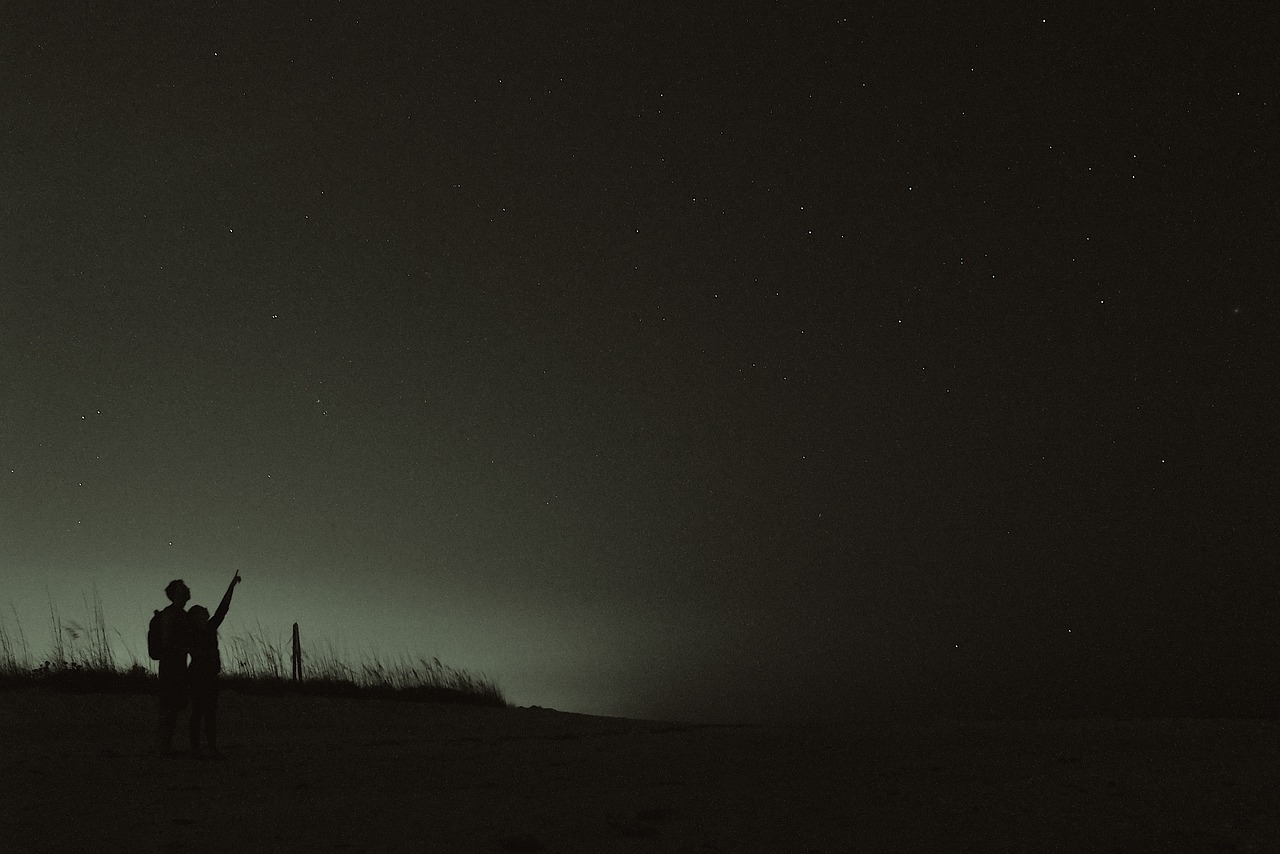 You can see planets such as Mars, Venus and Jupiter with the naked eye but these will require websites, apps or astronomical tables to track. The stars remain in relatively fixed positions so these are the best ones to learn off-by-heart. Here are Your First 5 Star Constellations with instructions to help you locate them. These are the same kind of instructions that would have been passed down from generation to generation.

Most people have heard of Orion and some will be able to show you its famous belt, “Orion’s belt”. Orion is much more than a belt, however. He is the son of the Greek God of the Sea and a great hunter. He was killed by a scorpion (which then became the constellation of ‘Scorpio’). 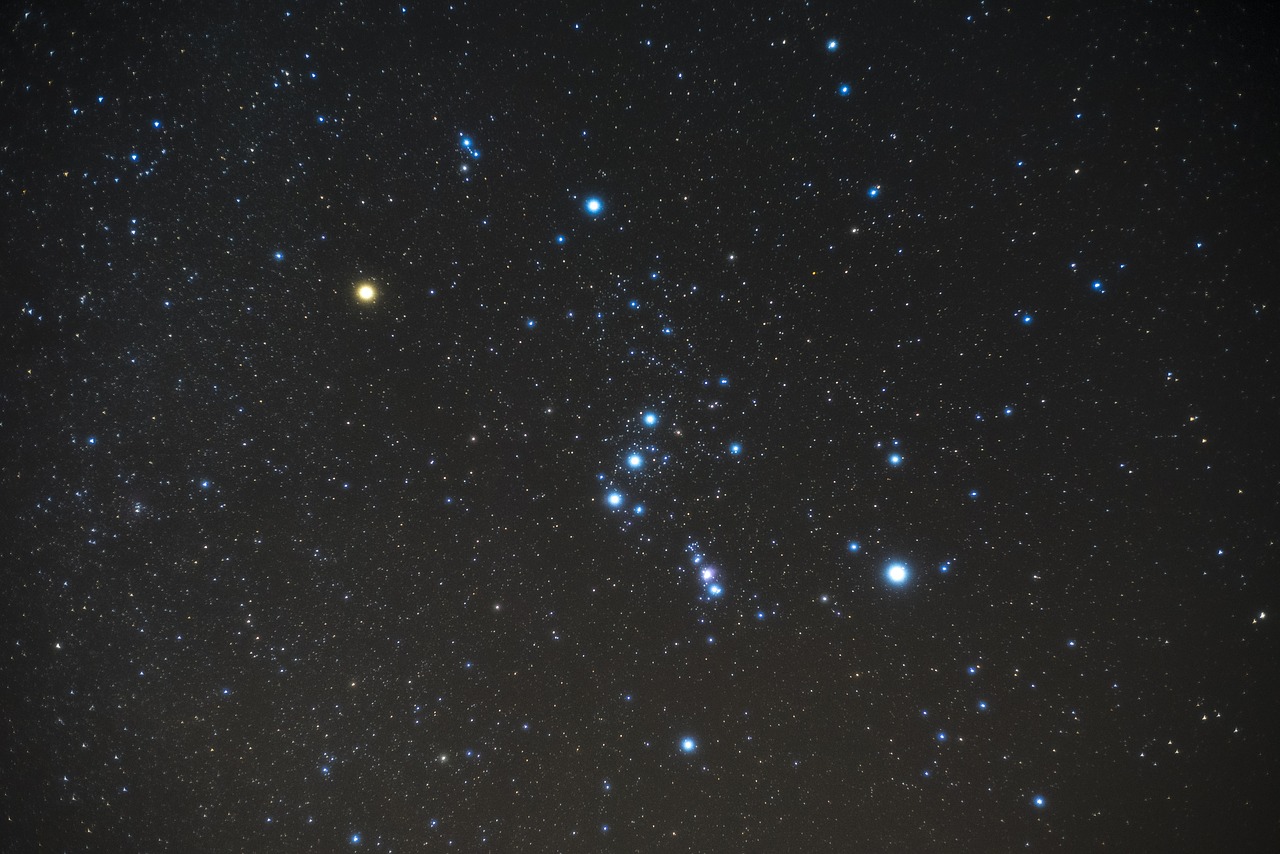 If you are in the Northern Hemisphere look to the southwest of the sky. If you are in the Southern Hemisphere, look to the northwest. If you are on the equator, then look to the west. Look for the three brightest stars which are also (nearly) equidistant apart and (nearly) in a straight line. That’s Orion’s belt. The two brightest stars above are Orion’s shoulders and his head forms a triangle with a bright star above and slightly to the right of his shoulders. His feet are a mirror image to his shoulders below Orion’s belt. Simple!

Ursa Major, which translates to ‘The Great Bear’, actually contains an asterism (popularly known groups of stars) referred to as ‘The Big Dipper’ or ‘The Plough’. 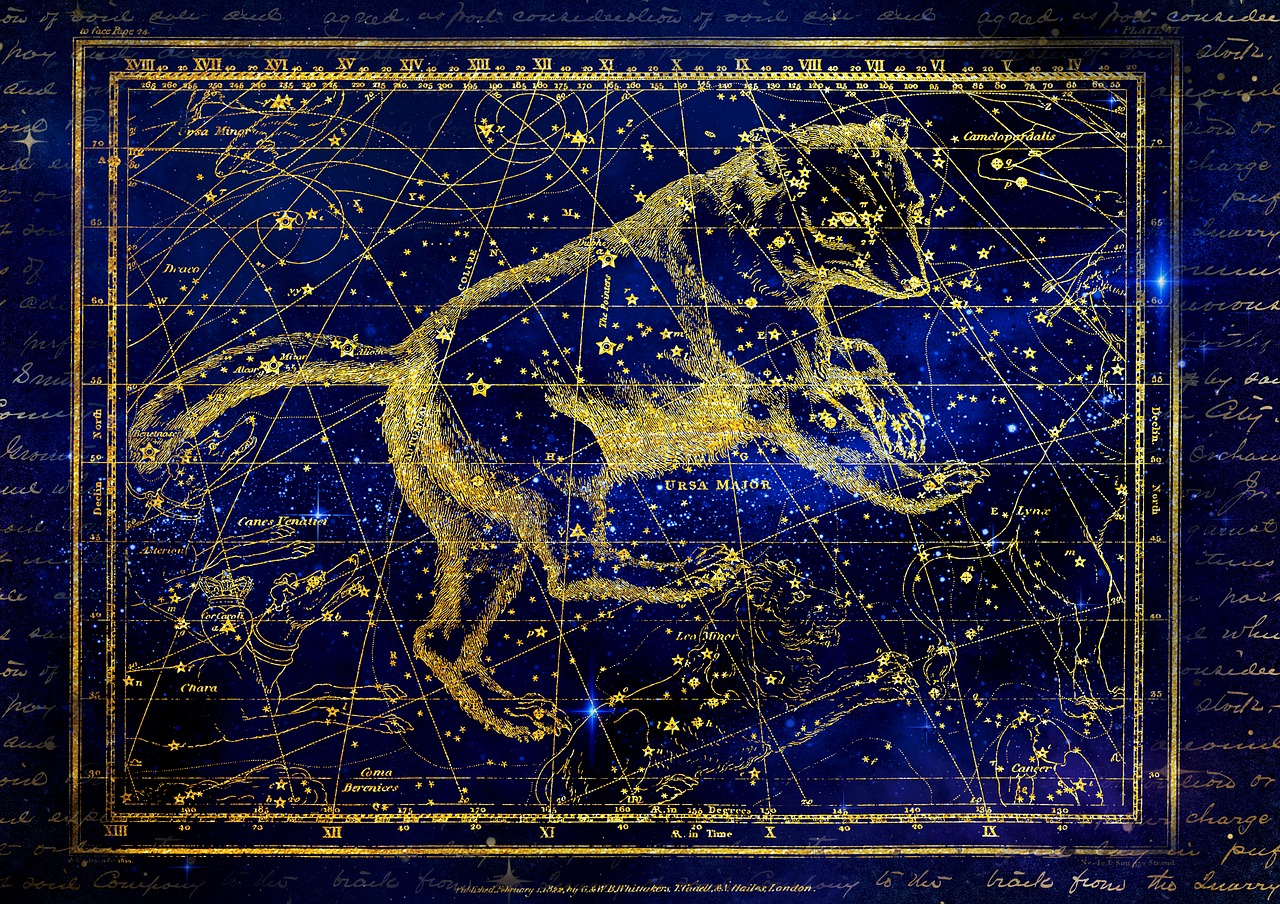 To find Ursa Major, look for a pan-shaped constellation in the north of the sky. Some see it as a large spoon, a kite or perhaps a wheelbarrow. There are 7 points in the constellation and to be sure you have found it, you can use Ursa Minor (see next) as a reference point. If you continue following the stars from the pan end, you will be able to join the dots of The Great Bear (the pan handle is the bear’s tail).

It may be called ‘The Little Bear’ but it includes one very important star in its constellation: The North Star! Ursa Minor and Ursa Major are both cirumpolar constellations, meaning they are fixed to the north of our sky. Most constellations can be seen by both the northern and southern hemisphere, depending on the season. 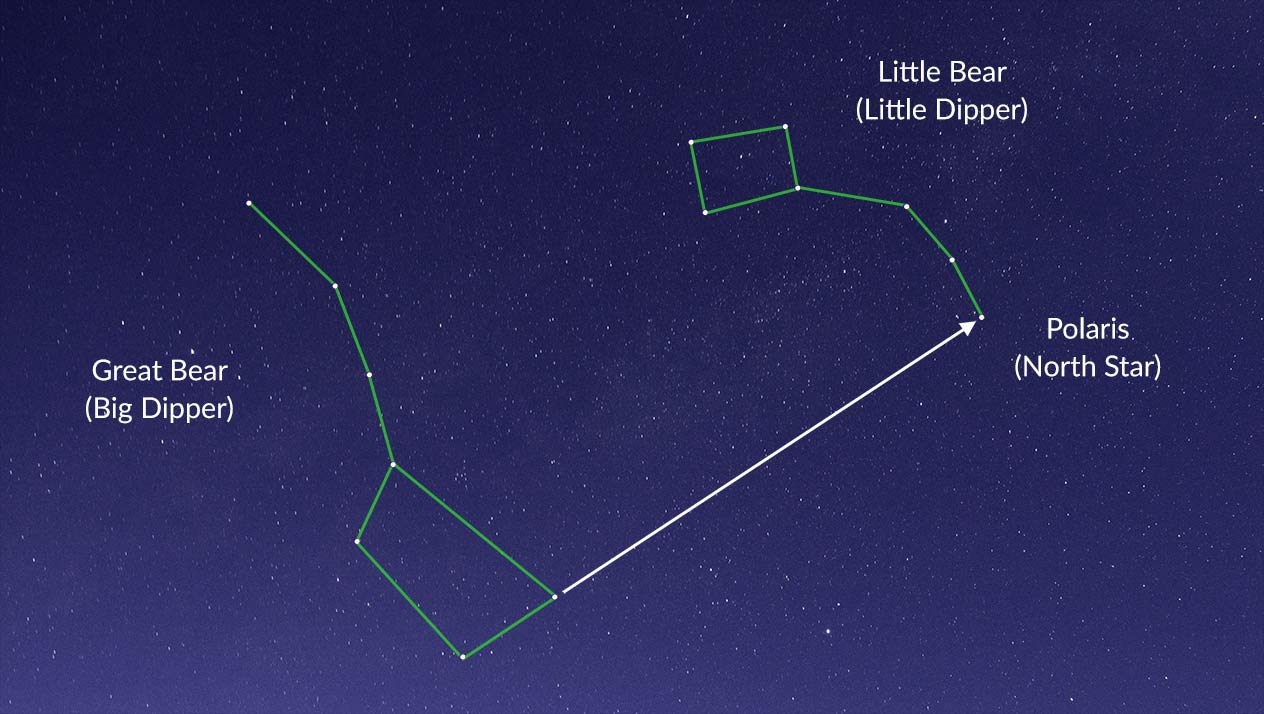 Ursa Minor is the northernmost constellation and so that’s exactly where you need to look. It has a similar shape to Ursa Major and is, therefore, called 'The Little Dipper'. These constellations rotate from our perspective with the changing seasons but the shape will stay the same. The last two points (at the pan end) of Ursa Major will always point to the first of Ursa Minor’s points (at the pan handle end) which is also the North Star. For this reason, these two stars in Ursa Major are often referred to as ‘pointer stars’.

Leo is the fifth astrological sign in the zodiac, for people born between July 23rd and August 22nd. Leo is Latin for lion and it was named by the Ancient Greeks after the Nemean Lion killed by Heracles. 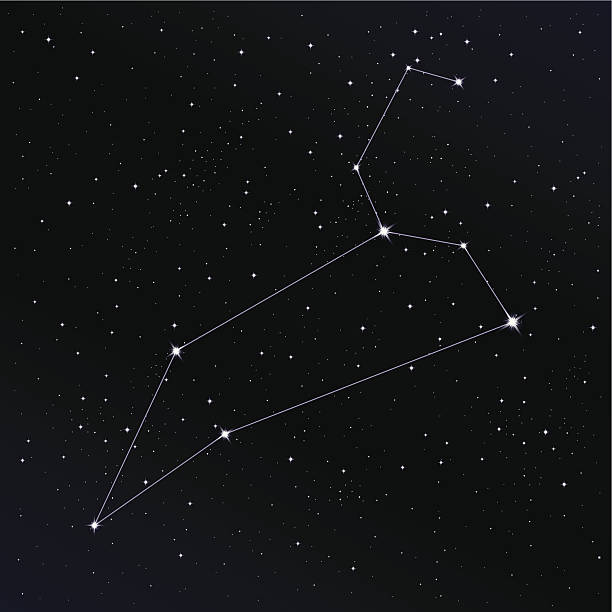 Leo is a particularly distinctive constellation as it has lots of bright stars. It’s also easy to find because if you know where Ursa Major is (see above) then just imagine pricking holes into its pan. The water from the pan would fall right onto Leo!

Crux, also known as the ‘Southern Cross’, is a southern circumpolar constellation so it is not visible to most of the northern hemisphere. Although it is the smallest of all 88 constellations, it is one of the most useful. It also adorns many countries' flags including Australia, New Zealand, Brazil, Samoa and more. 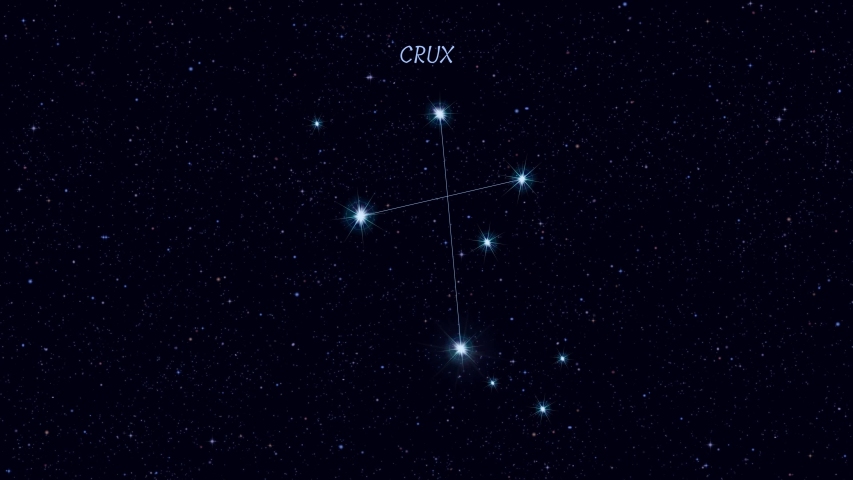 If you’re in the southern hemisphere then you simply need to look southwards for a distinctive cross made up of five stars (to the naked eye). Crux is bordered by Musca (meaning ‘The Fly’) and Centaurus. Centaurus is one of the largest and brightest constellations in the southern night sky. A little like with Ursa Major, the two brightest stars in Centaurus are called the ‘Southern Pointers’. Using an imaginary line falling between these Southern Pointers and another line from the base of the Crux (or the bottom of the cross), where these two lines intersect is just above the ‘celestial south pole’. Then, simply drop from this point to the horizon and you will find due south. A useful trick used many times by sailors navigating the seas! 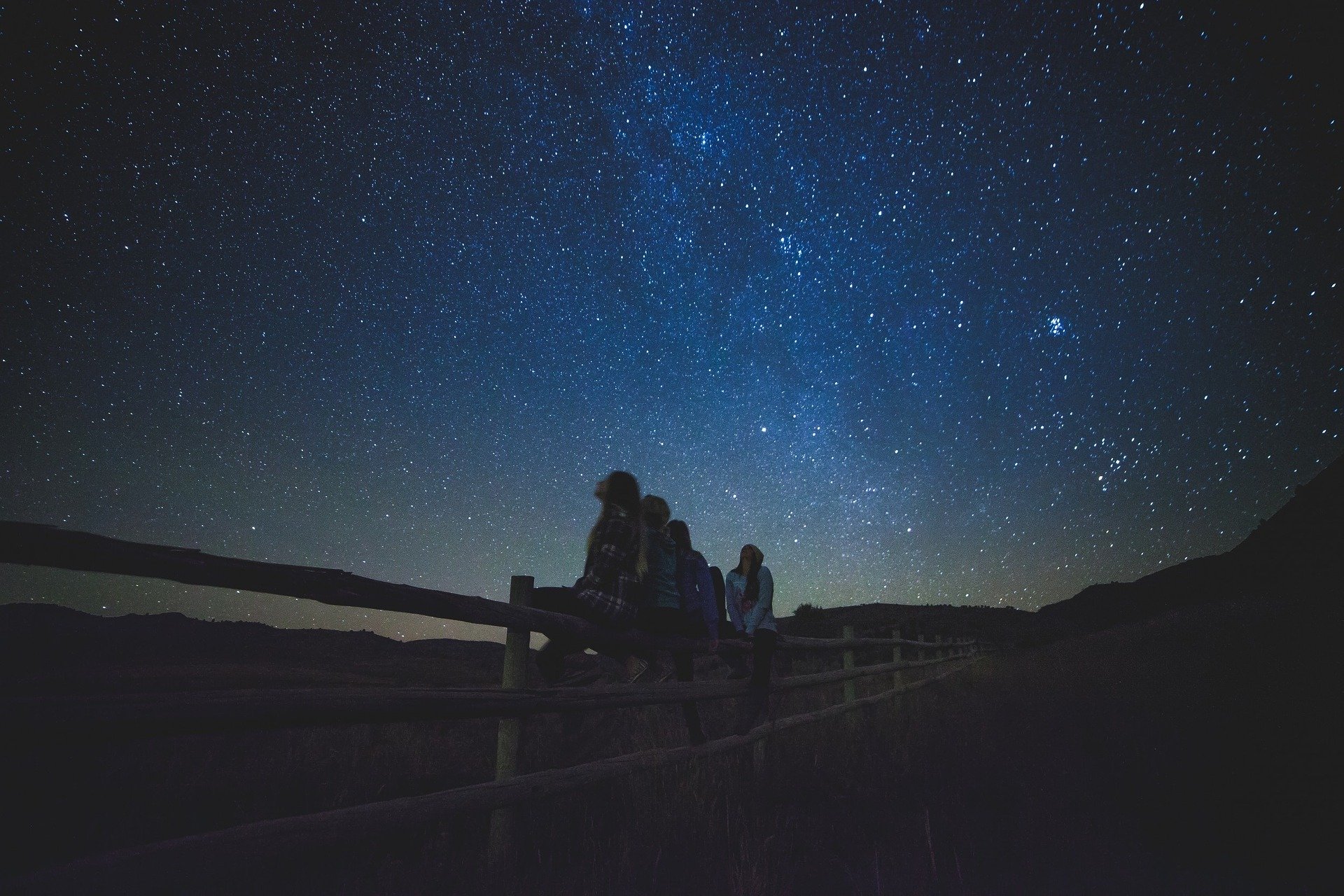 Knowing these five constellations will help you to explore the wonderous portrait that is our night sky. Share your celestial wisdom and appreciation with your family and friends. Everyone loves looking and learning about the night sky; we all seem to have an ancient connection and reverence for the stars!

Defend our night sky for the generations to come by stopping companies such as SpaceX launching thousands of satellites, thus changing our view of the stars. Use the stars as a platform to learn about history, the cosmos and get connected with our age of space exploration. You can even use your new knowledge to help you navigate when you’re lost. Most of all, however, enjoy the awe-inspiring and humbling effect of just looking up!

International Women’s Day, 2020 took place yesterday. The theme was “Each for Equality”. Here, at Under Lucky Stars, we thought this would be the perfect opportunity to commemorate some of our pioneering women astronomers!…

Take your mind to the Stars

If you love stargazing, you have come to the right place. Soaking up the night sky in all its starry glory is a truly magnificent experience – but it is not always easy. Read all about the history of telescopes and our top picks for telescopes for the budding astronomer!…